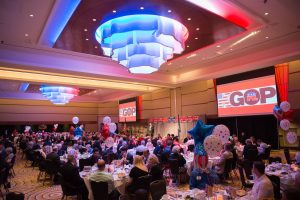 The Kalamazoo County Republican Party will celebrate a milestone achievement as the 125th Lincoln Tribute Dinner is slated for Friday, Oct. 29 at the Kalamazoo Radisson. Several candidates for statewide office will speak at the dinner. The event will mark the debut event for the KGOP All-Star Band, KGOP Chairman Scott McGraw announced.

Tickets can be purchased online at www.kgop.com or follow the link below!

“We are so excited to be holding our 125th tribute to our nation’s greatest president,” said McGraw. “What an incredible history we have in our local organization.” He noted this is one of the oldest events for the Republican Party in the nation. Michigan has the honor of being the birthplace of the GOP in Jackson on July 6, 1854. In fact, Kalamazoo played a role in that founding by holding the meeting in June 1954 that voted the date and location of the organizational meeting the next month.

Additionally, Kalamazoo was the only city in Michigan where Abraham Lincoln gave a speech during his lifetime, McGraw added. On Aug. 27, 1856, Bronson Park was the site of a rally for the first Republican presidential candidate John C. Fremont. “That heritage has never been forgotten by the KGOP,” McGraw said. “Each year the KGOP pauses to pay tribute to this important president, honoring him and his contributions to this country.”
The KGOP All-Star Band will make its debut at the event in October. Some of the finest musicians in the state have been assembled in this band, according to group founder Tim Brown.

The 125th Lincoln Tribute Dinner is the KGOP’s largest event each year and will be held on Friday, Oct. 29 at the Kalamazoo Radisson. Doors will open at 6 p.m. with the dinner program starting at 6:30 p.m. A private VIP reception will be held at 5:30 p.m. Tickets for the Lincoln Tribute Dinner are $55 each. VIP tickets for the dinner and the private reception are $100 each. Sponsorships are available also.

Another exciting part of the Lincoln Tribute Dinner will be a special tribute to the chairman’s award winners, which will be announced before the event.