Get to Know Garrett Soldano 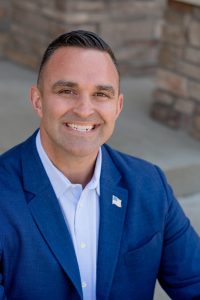 Dr. Garrett Soldano D.C. is a Chiropractor, small business owner, former football player, family man, and political outsider. Soldano owns and operates Soldano Family Chiropractic Center in Kalamazoo, and is raising two boys, Jack and Alex, with his wife Jennifer. Garrett graduated from Onsted High School before receiving his bachelor’s degree in Criminal Justice from Western Michigan University. Garrett played football for the WMU Broncos for 5 years, captaining the team his senior year. He then signed a free agent contract with the Chicago Bears, before being cut prior to the beginning of the next season. After his dream to become an NFL football player had faded, he returned to Onsted, where he got a job in construction, digging ditches. While digging ditches Garrett did a tremendous amount of soul-searching to determine what he wanted to do with the rest of his life. He decided to attend Palmer College of Chiropractic in Davenport, IA, and has since dedicated his life and career to relieving pain and encouraging healthy, abundant lifestyles. He has owned Soldano Family Chiropractic Center for 14 years. In April of 2020, Gov. Whitmer began stripping away freedoms at the beginning of the pandemic, Garrett started a Facebook group titled “Michiganders Against Excessive Quarantine” that rose to nearly 400,000 members in a matter of days, before Facebook shut the group down. After witnessing the censorship of hundreds of thousands of Michiganders, Garrett worked with others to form the organization “Stand Up Michigan” to put an end to Governor Gretchen Whitmer’s endless lockdowns and radical COVID policies. Garrett also served as a co-chairman of the Unlock Michigan campaign, fighting back to repeal Gov. Whitmer’s use of one of the state’s emergency declaration laws. Garrett’s efforts were ultimately successful, leading to the repeal of the laws that allowed Gov. Whitmer to enact such dangerous policies.

MORE TO KNOW ABOUT GARRETT SOLDANO FROM OUR UNITE FOR MICHIGAN Q&A:

Q. If you were not in your current role/endeavor, what would you be doing instead?
A. I would be continuing my career as a chiropractor, focused on improving the lives of my patients.

Q.  What has been the biggest impact in your industry or life in the last 5 years?
A. Governor Whitmer’s reckless lockdown policies had the largest impact on both my career and life over the past five years.

Q. Where do you see yourself or business in 5 years?
A. As Michigan’s next governor, in five years I will be leading the charge to uphold our Constitution, and put the power back in the hands of the people of Michigan.

Q. Who do you most admire or are inspired by, and why?
A. In regards to who has influenced my leadership style the most, I would have to point to both Ronald Reagan and Donald Trump.

Q. What organization is top on your list to provide support?
A. My top priority as Governor will always be the people of Michigan as a whole.