Get to Know Kevin Rinke 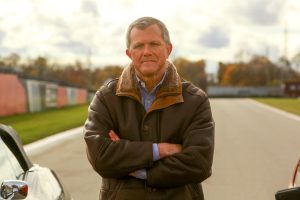 Kevin learned the value of hard work as a young man in Southeastern Michigan. He started his career working at the family automotive business, picking up trash, cleaning customer restrooms, and washing cars. Dedicated to understanding the business from the ground up, Kevin worked his way through every department in the business under the tutelage of the employees and management team.

After graduating from Michigan State in 1983, Kevin joined the family business on a full-time basis. His father’s dream was to have his sons succeed him in the dealerships he created and loved. Unfortunately, in January of 1988, Kevin’s brother and business partner died in an airplane accident, a tragedy that shaped both Kevin’s life and his approach to business.

As the head of the Rinke Automotive Group, Kevin was known for a leadership style that welcomed input from every team member. He considered various perspectives prior to the decision-making, encouraging collaboration, and making the right choice the first time.

Under Kevin’s leadership, the Rinke Automotive Group became one of the most successful private dealership groups in the country, providing good-paying jobs and quality healthcare to thousands of Michigan families. He has also been an executive for Penske Automotive and Sonic Automotive, two of the largest publicly traded auto dealerships in the world.

Kevin’s career in business has provided him with a wide range of experience interacting with clients, employees, vendors as well as executives at the highest levels in our country. After years in the automotive industry, he knew the job he set out to do with the Rinke Automotive Group was accomplished and it was time for him to turn his focus to a new mission.

In 2009, Kevin was introduced to Cassell & Associates and was immediately moved by the impact they had on the lives of traumatic brain injury (TBI) survivors and their families. He invested in the business because he believed in the opportunity it provided to its clients and staff. As a rehabilitative workplace, Cassell & Associates provided TBI clients an environment to be successful in by creating purpose and value. Once again, he saw the value of the job, the pride of work well done, and the satisfaction that earning a paycheck provides to everyone.

While not an expert on post-acute care, he was able to apply leadership skills previously learned to benefit his employees and clients. Cassell & Associates quickly grew to the largest rehabilitative workplace in Michigan. After selling the business to a national service provider, Kevin joined Centria Healthcare, a Michigan-based company that provides Autism Therapy to children across most of North America. His role with Centria was to open and expand operations across the state of California. He recognizes autism is a national concern and it can affect any child or family with no regard to ethnicity or social standing.

These life experiences have helped Kevin develop a unique skill set that he can leverage to help the people of Michigan recover from the consequences of poor leadership and political bickering. He promises to lead Michigan with humility and courage.

Kevin Rinke’s career is evidence that he won’t back down from a tough issue or a political challenge when it is the right thing to do for the people of Michigan.

Kevin and Janine, his wife of 25 years, reside in Oakland County. They have three children, Amanda, Grant, and Katherine, two dogs and a cat.

MORE TO KNOW ABOUT KEVIN RINKE FROM OUR UNITE FOR MICHIGAN Q&A:

A. My family has been in Michigan for hundreds of years. My middle name is Cadieux. My family worked on a farm outside of Fort Detroit back in the 1700s, before Michigan was even a state. I decided to get into the race for governor because I know I have the right skill set to fix the course of our great state. I have enjoyed traveling our beautiful state and seeing all she has to offer. To be honest, if I wasn’t running for governor I would probably still be traveling our state to hunt and fish – two of my favorite hobbies.

A. The unnecessary COVID-19 shutdown by Governor Whitmer is one of the most dramatic events that affected our lives, our small businesses, our children, our grandparents, and our state. The acts of Governor Whitmer were acts of political science, not medical science all because she was auditioning to be Joe Biden’s Vice President. One of my top priorities as governor will be righting the wrongs of this governor and keeping our state open and getting our people back to work.

Q. Where do you see yourself or business in 5 years?

A. To me, this race isn’t about where I see myself in five years but where I see the state of Michigan in five years. I envision Michigan as a state that has one of the best education systems in the nation, rather than the fastest declining. I see people and businesses moving to Michigan for its affordable tax climate and beautiful resources. I envision vocational training in our schools so we can create new opportunities for our young people that also help our industries to thrive. This is about reigniting our Midwestern resilience and making Michigan the best state to live, grow a family and have a business in the nation.

A. I am most inspired by my dad. At 17, he enlisted in the military and fought in the Pacific to defend the United States and freedom abroad during World War II. He is an American hero, and I believe that we must do a better job at honoring and taking care of our heroes.

A. The people of Michigan are my chief focus because they are the ones the governor and the legislature should serve. Unfortunately, our current governor thinks we serve her and that is why we have been her last priority at every turn. My pledge to the people of Michigan is that my first act as governor will be to work with the legislature to eliminate the Michigan personal income tax on January 1, 2024. Currently, nine states have no personal income tax and those states have been beating Michigan for new jobs in growing sectors of our economy. Zero income tax states are also growing their population at an exponentially higher rate than Michigan. Giving our residents and small businesses back almost $12 billion dollars of their own money will allow them to invest in their own priorities and better absorb the cost of the Biden-Whitmer inflation. I trust the people more than the government to decide how to best spend that money. In the time between when we eliminate the income tax and when those cuts take effect, I will work with the legislature, and my administration to find ways to reduce the size of government.

A. We face a close primary on August 2nd and I would be humbled by your support. My business experience makes me the most qualified candidate to be the Chief Executive of the State of Michigan. After four failed years, we need a new kind of leadership. A governor who has decades of executive experience, who has signed the front and the back of a check, who listens to the people he leads, and empowers them to be part of the solution, rather than dictating the terms of their lives. We know business leaders solve problems differently than career politicians. Our next governor needs to be someone with proven leadership and proven results. Experience matters, details matter, the scale of experience matters, and I plan to deliver that message to all Michiganders ahead of the August 2nd primary.