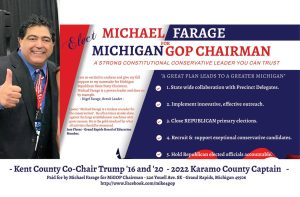 MORE TO KNOW ABOUT MICHAEL FARAGE FROM OUR UNITE FOR MICHIGAN Q&A:

A. The role of grassroots activists getting others activated into the political process is what I have been doing for 30 + years. Getting others prepared to take over counties and then implement Constitutional Government as we did in Kent and Ottawa counties is what I do and continue each day.

Q. What has been the biggest impact in your industry or life in the last 5 years?
A. Watching the MiGOP turn hard socialist and almost nobody not one leader standing up for we the people during the Michigan Covid mask mandates nor defending individual freedom and liberties.

Q. Where do you see yourself or business in 5 years?

A. The MIGOP will be leading the Pro Trump campaign for President and in every way and phase challenge the current socialist leadership at levels unlike ever seen before making their attempts at liberalism a challenge by the hour. Getting an educated and well-organized grassroots force to flip the Michigan House / Senate with Constitutional Conservatives.

A. I admire Jesus Christ as Master & King.
Veterans who paid the ultimate sacrifice and who served for preservations of our Republic. In politics at The Federal Level Ted Cruz is the ultimate Patriot. At the state level Patrick Colbeck’s daily fight for election integrity as well as Mark Forton, Jeff LaHuis, Zach Laring & Tim Walenga all new county leaders who stood tall in leading the America First Grassroots in building counties with strong grassroots members. Joe Moss (Ottawa County) who lead 9 (including himself) NEW commissioners to victory in the primary & General Election.

Q. What organization is top on your list to provide support?
A. Freedomworks / Freedom TEAMS as well as Let them play and almost all counties have a signature group that is made up of Grassroots. I will work with those groups to help prepare and grow the activism and the movement for 2023-24 victory.

Q. What is the biggest need you face in your business or organization today?
A. Placing the right people in place to attain success in every county at every level.