Get to Know Ralph Rebandt 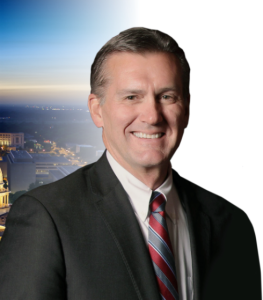 Ralph A. Rebandt II was born and raised in Woodhaven, Wayne County, Michigan.

Ralph has served as lead pastor for Oakland Hills Community Church in Farmington Hills Michigan since 1987 and is the Chairman of the OPC Church Extension Committee (CHEX).

Earlier in his career, Ralph was a member of the International Association of Machinists and Aerospace Workers, the Michigan Laborers Union, and the United Steelworkers. Ralph served as Religious Advisor on Governor Engler’s Sex and Drugs Education Task Force, Farmington Hills Year 2000 Planning Committee, and as a member for Farmington Families in Action.

Presently, Ralph serves as a member of the Board of Governors for the Council for National Policy located in Washington, D.C., and locally as a member of Farmington Hills S.A.F.E. (Suicide Awareness for Everyone.)

Ralph and his high school sweetheart, Carol, were married in 1976, and have four grown children and sixteen grandchildren. They live in Oakland County, Michigan.

MORE TO KNOW ABOUT RALPH REBANDT FROM OUR UNITE FOR MICHIGAN Q&A:

Q. If you were not in your current role/endeavor what would you be doing instead?

A. I would continue my involvement and investment in the lives of others as I have been doing for the past 35 years as lead pastor of my church, chaplain for the Michigan Police Chiefs, Farmington Hills Police Department, Beverly Hills Police Department, and service on local committees as well as on the Board of Governors for the Council for National Policy in Washington D. C.

A.The Trump policies have had a positive impact on me, as well as on all Americans and patriots.

A. Running for a second term as Governor of Michigan.

Q. Who do you most admire or are inspired by and why?

A. Jesus Christ. He showed compassion to all people through his life, death, and resurrection.

A. Pro-life organizations. One in particular, One Life for Life.

Q. What is the biggest need you face in your candidacy today?

A. To get our vision to “Make Michigan a Lighthouse to the Nation” out to every citizen in Michigan.