Get to Know Conservative Candidate for Michigan Governor Tudor Dixon 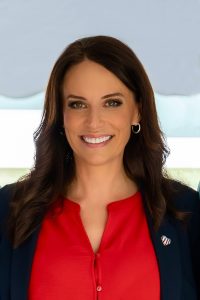 Get to Know Conservative Candidate for Michigan Governor Tudor Dixon:

Tudor Dixon is a wife, mother of four, cancer survivor, and former small business owner. The daughter of a steel industry worker, Tudor grew up around factories her entire life and spent a decade working in steel manufacturing herself.

Tudor believes we can only build Michigan’s comeback through common-sense solutions to everyday Michiganders’ problems. That means a limited government that focuses on creating an environment where everyone can get an excellent education, build economic security, live in a safe community, and be free to pursue their best life. Tudor also wants to clean up Lansing by holding the government accountable. That means reining in the out-of-control executive branch, strengthening ethics and transparency laws, and ensuring government officials don’t get special treatment when they break laws and rules.

Tudor believes government should give Michiganders the tools they need to build their American dream and then get out of the way so they can.

Tudor began her professional career in Chicago with an industry-leading public relations and marketing firm after graduating from the University of Kentucky with a degree in psychology. Her father recruited her to the steel industry after investing in a foundry in Michigan in the early 2000s. She worked first with her father’s foundry and later with other companies after the Great Recession drove him out of business. Tudor spent nearly a decade in the steel industry before returning to her roots in public relations and building a successful media business and career in Michigan, where she is raising her family.

MORE TO KNOW ABOUT TUDOR DIXON FROM OUR UNITE FOR MICHIGAN Q&A:

A. I was enjoying my role in the media advancing conservative values and communicating the ways people like Gretchen Whitmer were destroying lives and livelihoods for partisan political purposes. Campaigning has afforded me the opportunity to again visit factories and shops across the state and reminded me of how much I enjoyed working in manufacturing.

A. I hope to be at the start of my second term and continuing to advance our agenda of limiting government, empowering parents, and fostering an environment where individuals and entrepreneurs are capable of achieving all they want to because an oppressive government is no longer standing in their way.

A. It may sound cliche, but Michigan parents have fought so hard for their children during this time to receive the proper education we all expect. They have fought mandates and a curriculum that demonizes our country. Gretchen Whitmer’s response to the pandemic has crystallized in many parents’ minds what is wrong with our schools and energized them to do something about it. I admire them and want them to know they will have an ally who will ensure they are never again treated the way Whitmer and many school administrators have reacted to them.

A. I would like to be supported by organizations that believe parents know best, that job creators are well-intentioned, that believe farmers are the best stewards of the earth, and that our rights come from God and are enshrined in the Constitution.